We visited Sydney, not once, but twice in the month of May! The first time, we spent a few days as a layover from Fiji to catch our next flight to Cairns and the second time was to head back from Melbourne for Vivid Sydney, an annual festival of light, music and ideas that ran this year from May 22-June 8, 2015. In Sydney, we walked around the Circular Quay, Sydney Harbour, Central Business District (CBD), had lunch at Chinatown and made a new friend Steve from South Africa over lunch, went to the Sydney Opera House (many times), checked out the Royal Botanic Gardens, climbed on the Sydney Harbour Bridge during Vivid Sydney, and did a whole lot more. Check out our photos below.

Detail of the ceramic tiles on the Sydney Opera House

Sydney Opera House at night next to the restaurants

There is no other way to experience Sydney, than to climb to the very top one of Sydney’s iconic landmarks, the Sydney Harbor Bridge. Josh has previously climbed the bridge, but it was my first time and we decided to do the night climb during Vivid Sydney. It was also the world’s widest long-span bridge, at 48.8 m (160 ft) wide, until construction of the new Port Mann Bridge in Vancouver was completed in 2012.

Group Photo of the Sydney BridgeClimb Experience. Sorry about the lo-res, they didn’t provide us with a digital copy.

Customs House lit up with an animated sequence at Vivid Sydney

The Circular Quay during Vivid Sydney

Norbert the Nautilus at Chatswood 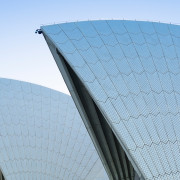