Fremantle Prison is a UNESCO Heritage Site, part of Australia’s convict prison sites and the only building listed in Western Australia. Being the most intact convict-built prison in Australia, it was in continuous use for almost 140 years until 1991. Opting for a more adventurous tour, we decided on the tunnel tour. Slipping into our coveralls and putting on our hard-hats, we had to descend down a 22-meter ladder where we would eventually go under the walls of the prison and underneath the city Fremantle itself.

May and Josh giving their thumbs up at the end of the tour.

This has to be one of the funniest tours we have been on. There was no photography allowed, due to safety precautions, so we can only share the photos Fremantle Prison has. Descending down the ladder was a bit scary at first but we both made it down with ease. It was reassuring that we were connected to the ladder with a safety harness. When we reached the bottom of the ladder, the first thing we were shown were the fossils of shellfish, indicated that we were standing on the bottom of the ocean. Well, what used to be the bottom of the ocean. As we were led down dry sections of tunnel, we noticed what looked like roots hanging down from the top of the tunnel. Indeed, they were from the trees growing outside the walls of the prison. We were now outside the prison, we had escaped, or so we thought. The tunnel system only had entrances and exits inside the prison, but it stretched out from the prison and under the city, there was no escaping the prison from the tunnels. After reaching the end of one of the tunnels we made our way to the few tunnels that had water in them, boarding our replica convict punts. This was the best part of the tour.

Paddling down the knee-deep water of the narrow tunnel was a fun and exciting challenge. Keeping the punt from hitting the walls the hardest part, we both had to continuously put our hands out to brace ourselves and keep the punt from hitting and damaging the walls. The commentary from the other members of the tour had us laughing the whole time, especially when we floated under a beam with cockroaches on it and one lady started to freak out. Our guide told us that there were no officially reported deaths while the convicts constructed the tunnel, but it is hard to believe no one died in the construction of the tunnels. As we paddled our way down the tunnels we were aided by modern lights helping us to guide our way, but when he had the lights turned down to the level of what the convicts would have been working under, we could see very little. We think the reason no one was reported to have died was that officials did not want the general public to know that there were dead people contaminating their source of drinking water. At one point, we stopped the punts and could hear noise coming from above. It was hard to tell what the source was and we all guessed wrong as to the source. We happened to be under the main road in the city and heard cars driving by. Once again we had left the prison but could not escape. After paddling our way through the tunnel system, we had to go up the way we came down. This time, it was much easier going up than going down, concluding our being convicts for a day. A video of the tour by Destination WA.

Afterward, we toured the prisoner gallery which included art from the various prisons around Western Australia. 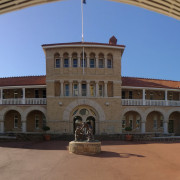 Perth: World's Largest Gold Coin and Our Weight in Gold
The Street Art Scene in Melbourne

Perth: World’s Largest Gold Coin and Our Weight in Gold
Scroll to top